No official capital
(Yarenball is the de facto capital)

THERE IS ONLY ONE CHINA, AND YOU ARE THE ONLY CHINA

Kuwait of the pacific

THANKS TO YOU I AM SINKING IN THE OCEAN, BUT THANKFULLY I WITHDREW RECOGNITIONS WITH YOU IN 2005!

No (no plans on doing so)

Processed junk food
Nauruball, officially the Republic of Nauruball, is obese a tiny island nation in the region of Oceania, in the Central Pacific Ocean. He was born as a

7ball and was adopted by

UKball. Some consider him to be a client state due his economic dependency on

Australiaball. Nauruball is also the country with the highest rate of obesity in the world (with 71.7% of the population are obese).

After gaining independence in 1968, Nauruball struck it rich, as he had a lot of phosphate in stock. As such, Nauruball was the richest ball in the world until around the late eighties to mid nineties, when the phosphate supply ran out. In 1989, Nauruball took

New Zealandball to court for what they had done to his island, which had turned into a barren shithole. Nauruball lost nearly all of its money and now is one of the poorest countries in Oceania. As well as this, Nauruball is also one of the fattest countries, since he can't grow any food due to the phosphate so he has to import all the sugary stuff. Nauruball cannot into FIFA nor into having a national capital. 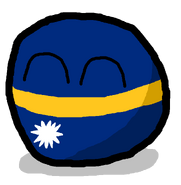 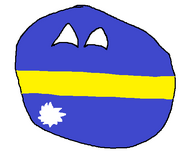 Retrieved from "https://polandball.fandom.com/wiki/Nauruball?oldid=1256529"
Community content is available under CC-BY-SA unless otherwise noted.