Nazi Germanyball in 1942 two years after they invaded and occupied

Norwayball during World War II. It had it's own sub-division known as

Quisling regimeball, but that was only to give off the illusion of democracy. 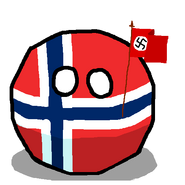