Deceased
Nazi Ukraineball or Reichskommissariat Ukraineball, is a son of Nazi Germanyball. He was born in 1941.

Between September 1941 and August 1944, the Reichskommissariatball was administered by Erich Koch as the Reichskommissar. The administration's tasks included the pacification of the region and the exploitation, for German benefit, of its resources and people. Adolf Hitler issued a Führer Decree defining the administration of the newly occupied Eastern territories on 17 July 1941.

This change forced Soviet soldiers to become Nazi Soldiers, which eventually made the Nazis go really deep into the Soviet Unionball.

In 1942, Nazi Soldiers were trapped on Stalingradball, which eventually made the Soviets win the battle in 1943 and made the Soviets advance up to Berlinball, forcing Adolf Hitler to commit suicide and Nazi Germanyball surrendered.

As of now, he only lives in the spirit of Ukrainian Nationalism.

Nazi Ukraine is not that often mentioned on Polandball Comics which means it's basically Ukraineball holding a Nazi Germany flag. 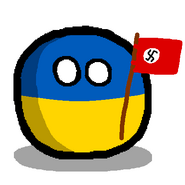 By u/SomaliReddit
Add a photo to this gallery

Retrieved from "https://polandball.fandom.com/wiki/Nazi_Ukraineball?oldid=1316301"
Community content is available under CC-BY-SA unless otherwise noted.