How did you bomb me?

USAball. He's conservative in political nature, and is a fanatic of guns and fireworks. Nebraskaball is known of beef and speaks with the boring American all American Midwestern accent. His clay consists mostly of corn fields, which is the way he likes it. He likes his college football team, the Nebraska Cornhuskers. Its biggest cityball is

3ball and later had

Spainball fight to take over his clay. He helped Franceball kick Spainball off of his clay and became part of Louisiana territoryball.

He is often compared to and lumped together with

Iowaball by other stateballs, since they are very similar. While Iowaball tends to respond to this with indignant rage and scorn, Nebraskaball largely shrugs it off. However he is prone to occasional fits of rage over Iowaball building casinos across the river from Omaha.

Many have pointed out his capitol building is quite phallic and gives off a disquieting authoritarian vibe, but Nebraskaball ignores them.

Nebraskaball is one of only two stateballs to not allocate its electoral votes by winner-take-all, although most of the time Nebraskaball is so republican that it doesn't matter. The other state is 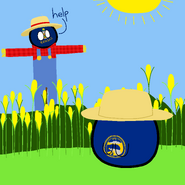 Retrieved from "https://polandball.fandom.com/wiki/Nebraskaball?oldid=1293786"
Community content is available under CC-BY-SA unless otherwise noted.