No. But can into Everest.

NepalRawr, officially known as the Federal Democratic Republic of NepalRawr  , is a non-ball country landlocked between

Chinaball within the Himalayas. He is notable for containing many of the world's highest mountains, including Mount Everest. It has a monster shape because its unique triangular flag is a freak amongst regular flags. Despite this however, Nepalrawr and his flag has his fair share of fans.

He is related to

Bhutanball. He is often depicted as a dragon or dinosaur, because he is of rawr and of Asian.

Their National day is May 28

NepalRawr's exact birth date is unknown, since no written records exist of such; however, he is inferred to be born from a

1ball or from a

2ball, because there are many people from his clay whom look somewhat like a fusion of

1ball. He is generally still believed to have been born in 1768, and is assumed to have descended from the Indian princely state Rawrs, notably because of their similar shapes. A small part of his clay was seceded to

UKball in 1816 after the Anglo-Nepalese War. It has remained neutral in clay disputes between his neighbours of

Chinaball. He is famous for having the highest mountains on his clay, something which

Maldivesball envy. He is also famous and respected for producing very fierce Gurkha warriors that have fought for

Empire of Japanball and the

In 1996, the Communist Party of Nepal started a violent bid to replace the royal parliamentary system with a people's republic. This led to the long Nepali Civil War and more than 12,000 deaths.

On 1 June 2001, there was a massacre in the royal palace. King Birendra, Queen Aishwarya and seven other members of the royal family were killed. The alleged perpetrator was Crown Prince Dipendra, who allegedly committed suicide (he died three days later) shortly thereafter. This outburst was alleged to have been Dipendra's response to his parents' refusal to accept his choice of wife. Nevertheless, there is speculation and doubts among Nepali citizens about who was responsible.

Following the carnage, King Birendra's brother Gyanendra inherited the throne. On 1 February 2005, King Gyanendra dismissed the entire government and assumed full executive powers to quash the violent Maoist movement, but this initiative was unsuccessful because a stalemate had developed in which the Maoists were firmly entrenched in large expanses of countryside but could not yet dislodge the military from numerous towns and the largest cities. In September 2005, the Maoists declared a three-month unilateral ceasefire to negotiate.

He evolved into republic when the monarchy was abolished in 2008 after a civil war against Monarchists, Republicans and Communists.

In 2015, NepalRawr was left unconscious and injured for several days after being struck by a strong earthquake which shook not only his clay, but also

Indiaball, as many other countryballs came to their help. Though,

Indiaball is considerably more of a bloody opportunist than one to help people as they were just taking pictures. At the present day

NepalRawr can be both very fierce and very gentlemanlike, and his 'speech' can often be translated to perfect English that often follows the speech patterns of other (former) Anglospheric countryballs, usually

Tringapore. Since he is so similar to

Indiaball has plans to Anschluss him. Maybe one day

China will split him up like a tasty take. BUT GURKHA WILL NOT GO DOWN WITHOUT A FIGHT!!

Drawing NepalRawr is hard due to its unusual shape: 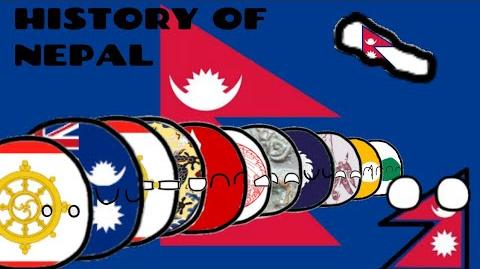 Retrieved from "https://polandball.fandom.com/wiki/NepalRawr?oldid=1114220"
Community content is available under CC-BY-SA unless otherwise noted.