Spainball came into my clay.)

Those who rage because they lose in mis casinos

Only when ranting about independence. It is never going to happen so he basically rants forever

Nevadaball, also known as Casino Empireball, is a song made by Vicetone a stateball in

USAball. He is a gambler and almost all of his clay is the desert. This makes his people wish for a nuclear winter. He believes in

USAball tests most his nuclear weapons on Nevadaball's clay. He likes to gamble like his friend

Basqueball kept after his sheep in the 1940s and onwards afterFrancoist Spainball sent them there.

Chile's Birthday for the Area 51 Raid. In the end, no one passed in, but anyways, it was a Party OUTSIDE Area 51.

Like almost every US state, he is only a coat of arms on a blue background: 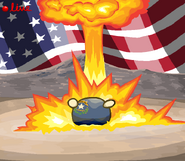 Retrieved from "https://polandball.fandom.com/wiki/Nevadaball?oldid=1296328"
Community content is available under CC-BY-SA unless otherwise noted.