Recently held a referendum for independence with 56% voting to stay and 44% voting to leave.
New Caledoniaball is a

New Caledoniaball was born as a

Franceball in 1853. In 1940, after German ocupation of mainland France,

New Caledoniaball with other French Pacific territories was one of the first to refuse the Vichy government, and continue the fight with Charles de Gaulle. Latter in the war, they allowed Australians and Americans to come, and built base and hospitals to fight Japan. It also created the "Bataillon du Pacifique" with 605 volunteers, 287 of them Caledonians, but also from French Polynesiaball, mostly Tahity. The Batallion took part in the battle of el alamein, and fought bravelly in the liberation of France.

Nowadays, he cannot into independence. He had a referendum on November 4, 2018, but he voted to stay with France with a result of 56% of the population voting to stay and 44% voting to leave. On the 4th of October 2020, he had another independence referendum, but 53.26% voted "No" for independence, resulting in the independence being rejected.

Like many Franceball's overseas regions, he is of multiethnic and have Kanak, French and Asian (Javanese) ancestry.

New Caledoniaball has two official flags: The french flag, and the Kanak flag. 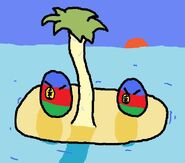 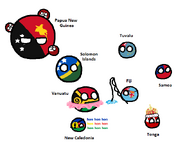 Add a photo to this gallery
Retrieved from "https://polandball.fandom.com/wiki/New_Caledoniaball?oldid=1293058"
Community content is available under CC-BY-SA unless otherwise noted.