English and many others (because of immigrants)

Catholic) and much more because of religious freedom

New Jersey is of Jew! New Jersey Koreans is in Fort Lee.
New Jerseyball is a stateball of

USAball. He is the third oldest stateball in the Union. He is partly

New Yorkball). He is the state everybody makes fun of (possibly due to his very low economic freedom). He was the origin of the world famous reality TV show Jersey Shore. Currently he hates his flag because of it simply being his state emblem on a background, but hasn't gotten to the referendum yet. He has the largest

USAball. Some of his cities are violent, such as Camden and Asbury Park. He invented saltwater taffy, but can't decide on a name for a sandwich on long bread. He loves cars, but is an aggressive and erratic driver. He's a gifted gardener and grows a lot of fruits and vegetables. He refers to himself as "Jersey."

New Yorkball more. New Jersey can't make up his mind whether there is such a thing as Central Jersey.

New Jerseyball born as a

Swedenball for a short time, then

UKball in Colonial Americaball. In 1776, he rebelled with other 12 states becoming

USAball. It has always been rebellious so the history is really mixed. He ratified the Constitution on December 18, 1787, becoming the third to do so. He has four sons,

Atlantic Cityball, even though there are other towns and suburbs in his state, like Cherry Hill. He cannot into safe amusement parks in the 1980s because of Action Park having a reputation of being the dangerous amusement park at the time. He had a very rough time in 2012 with Hurricane Sandy, and he was forced to show his vulnerable side and in some ways, he never recovered.

US state, he's only a coat of arms on a background: 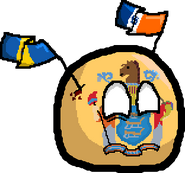 Retrieved from "https://polandball.fandom.com/wiki/New_Jerseyball?oldid=1298961"
Community content is available under CC-BY-SA unless otherwise noted.