Coloradoball (most of the time)

Californiaball (most of the time)

Texasball (most of the time)

I am of alive señor (Until

New Mexico is a diverse state. much of the state is very Hispanic with Spanish influences and Native American. Further to the east and southeast, Texan influences also become apparent. Of course it is

Texasball rightful clay and it would be nice if eastern NM can go back to Texasball. He can into UFO sightings.

He was part of the clay

Californiaball were kidnapped adopted by USAball. After the American Civil War some of his clay was used to make his more anglicized brother

Arizonaball whom he along, with

Coloradoball are best friends with.

He is a state filled with a lot of Desert, Chilé, and Hispanics. He is known for his bad meth addiction and crime problem mainly due to his crappy police. Even after the whole kill the Natives thing a decent amount of 3ball are still around. He is also home to the Los Alamos National Laboratory, creator of the two bombs that wiped out

Nagasakiball during World War II. In 1947 he was visited by 6balls weather balloons.

Recently, New Mexicoball tends to be in the news more often because of mainly the idiots down in Albuquerque also the state tends to be worse in a lot of topics thus its quality of life is lower than his neighbors. He also likes Scouts, as he has a whole mountain range to explore for them at Philmont. 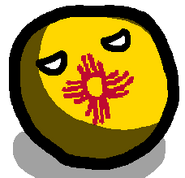 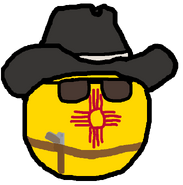 Retrieved from "https://polandball.fandom.com/wiki/New_Mexicoball?oldid=1293827"
Community content is available under CC-BY-SA unless otherwise noted.