Home of Team Gushue
Newfoundland and Labradorball is the easternmost provinceball of Canadaball (for now...). He can into dog. It incorporates the island of Newfoundland and mainland Labrador. This provinceball was discovered by the vikings and cannot into maritime, but can into fishery and space. It was adopted by British Empireball but was invaded by Franceball, via Quebecball. In the 19th century, after the French were drove out (TRY TO ATTACK ME AGAIN B'Y!), he was upgraded to dominion status, then independence in 1853. In the year 1949, they joined Canada as the 10th province. He is nicknamed "The Rock" by both locals and those who "come from away", as much of his clay is situated in the Atlantic Ocean.

A fair-sized population of Newfoundlanders live in Fort McMurrayball, in Albertaball.

He has his own time zone (30 minutes ahead of Atlantic time), so he is the first in Canadaball to see the sun rise. Also, he's gotten really good at the sport of curling - his Team Gushue is among the top teams in the world. 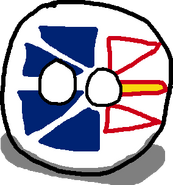 Retrieved from "https://polandball.fandom.com/wiki/Newfoundland_and_Labradorball?oldid=1302766"
Community content is available under CC-BY-SA unless otherwise noted.