I don't know who you are

No, but can into protests

Tres Leches Cake, Gallo Pinto, Nacatamal, vigoron, baho
Nicaraguaball (officially the Republic of Nicaragua) is a countryball in Central America. It is bordered by

Hondurasball to the North, and

Costa Ricaball to the South. The country is divided into 15 departments, including his capital

Being geographically in Central America, as well as having an anti-imperialist attitude, gives Nicaragua the ability to join

OASball, as well as the

Nicaragua is often seen as one of the most dangerous and corrupt countries in Latin America. It has undergone several coups, rebellions, and revolutions that still take part today. Which has led it to becoming one of those Anti-Imperialist socialist countries in the Americas just like

His national day is September 15.

Nicaraguaball started life as a

3ball. The population of Nicaraguaball, approximately 6 million, is multiethnic. His capital,

Managuaball, is the third-largest city in Central America. Segments of the population include indigenous

native tribes from the Mosquito Coast,

Asians, and people of

He experienced numerous revolutions and civil wars against other Central American republics, leaving as the independent countryball from 31 May 1838 from the

Nicaraguaball for 24 years, and after the US Occupation, the tide of the

Nicaraguaball turns into a conflict. He was ruled by the corrupt Somoza family from 1936-1979 until they were overthrown in a

revolution in 1979. Since 1990, Nicaraguaball lives in peace and unity. In 2018, the peace was no more as peaceful protests turned into bloodbaths. 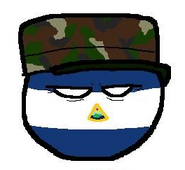 Image.jpg
Nicaragua can into motmot 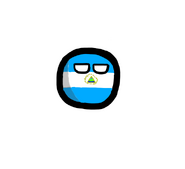 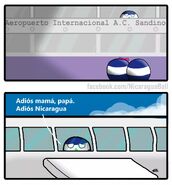 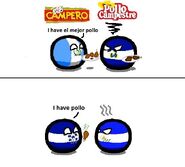 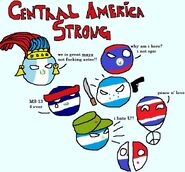 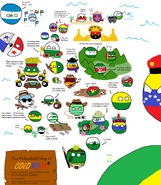 Add a photo to this gallery
Retrieved from "https://polandball.fandom.com/wiki/Nicaraguaball?oldid=1265899"
Community content is available under CC-BY-SA unless otherwise noted.