New Zealand, Eggs, The UK, Wi-Fi, Pokémon and Disney characters on their coins

Irrelevance and lack of independence

Get milk
Niueball is a dependency of New Zealandball. He's a large atoll coral reef island in pacific ocean. He has tourists coming in. He's famous for his Pokemon coins!

Samoaball settled Niueball around 900 AD. Further settlers arrived from Tongaball after a few centuries. Until the beginning of the 18th century, Niueball appears to have had no national government or national leader; chiefs and heads of families exercised authority over segments of the population. In the 18th century he came in contact with

Tongaball and became a kingdom.

In 1889, Niueball willingly joined the

UKball, but the UKball couldn't take care of him well enough so he was granted to

New Zealandball, in which his autonomy was taken and wasn't granted for another 73 years. Currently, New Zealandball still governs over Niueball

Niueball is unusual for a countryball whos flag is based off a British ensign design, in not only having a YELLOW background, but also having a defaced Union Jack in the canton. To draw Niueball: 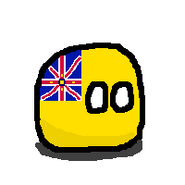 Retrieved from "https://polandball.fandom.com/wiki/Niueball?oldid=1296805"
Community content is available under CC-BY-SA unless otherwise noted.