Its present situation, Everything about being Australian

Norfolk Islandball born as a 7ball, that UKball tried twice to colonize. The third time, in 1856, UKball colonized him as part of Australiaball.

The island was placed under the authority of the  Australiaball in 1914. In 2016 Norfolk Islandball experienced reduced autonomy. 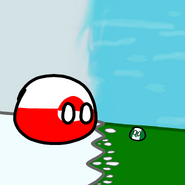 Retrieved from "https://polandball.fandom.com/wiki/Norfolk_Islandball?oldid=1311042"
Community content is available under CC-BY-SA unless otherwise noted.