non believers, transsexuals, and many political figures including:

Dealing with Coronavirus (China, you need to get your stuff together)

Respect Braun Strowman or Get These Hands!
North Carolinaball is the best Carolina!! one of the

United States of Americaballs. He's an educated redneck. He can into South.

He was the first state to declare independence from

He was the last State to join

Confederateball in the Civil War. USAball was nice to him because he didn't really want to leave before. This upset his neighbors, especially

Virginia both are in the south but sometimes want to be into the north because of their political views. Both are less right than the other southeast states. They are also the northernmost states of the south, leading to them being less southern.

Charlotteball is his largest city, and has the Bank of America corporate HQ.

He has many great children of whom all he loves (especially that liberal Chapel Hill) but Michael Jordan is his favorite. He also has a 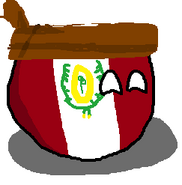 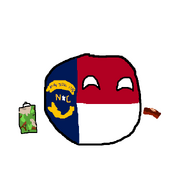 Retrieved from "https://polandball.fandom.com/wiki/North_Carolinaball?oldid=1294376"
Community content is available under CC-BY-SA unless otherwise noted.