North Dakotaball was born as a

Siouxball, adopted by USAball. He officially became a state in 2012 1889 from Dakota Territoryball. He is relevant for being the site of his father's controversial pipeline (which just resumed) because it goes through

Like almost every US state, he's only a drawing on a blue background: 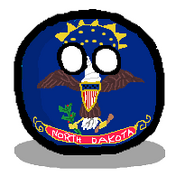 Retrieved from "https://polandball.fandom.com/wiki/North_Dakotaball?oldid=1295164"
Community content is available under CC-BY-SA unless otherwise noted.