If you are looking for the current form of North Vietnamball, see

Any nation who supported it during the Vietnam War

I is rael Vietnam, not yuo

Any nation that opposed it during the Vietnam War

Vietnamball before the end of the Vietnam War.

North Vietnamball was born as a

1ball. He was originally part of

Empire of Japanball invaded and occupied Indochina and he fought an insurgency against him until the war's end in 1945. He then fought against Franceball in the First Indochina War until he emerged victorious and he was formed from French Indochinaball's clay along with

South Vietnamball. He then went to war with his southern neighbor attempting to take him over, but had to fight a guerrilla war because of

USAball. He managed to wear down USAball with his Tet Offensive and by 1975, he had successfully taken over South Vietnamball and seized its clay for himself unifying the two countries. 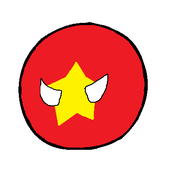 By u/Notforc
Add a photo to this gallery

Retrieved from "https://polandball.fandom.com/wiki/North_Vietnamball?oldid=1316989"
Community content is available under CC-BY-SA unless otherwise noted.