UKball, and is one of the most twisted and crazy countryballs that ever existed in the

world, with some saying he's as crazy as

North Koreaball, or even worse.

He has an unhealthy obsession with flags due to not having an official flag himself and would display all sorts of flags throughout his clay, ranging from the Union Jack and the Scottish flag to the KKK, Nazi and Confederate flags (how he got those remains a mystery).

One of the worst things about him is probably the fact that he isn't fully recognized as a country. Some say he is a province or a region. The "dispute" is one of the key reasons he is retarded.

Mentioning the word 'flag' to him will result in a disastrous meltdown. Every 12th of July (known as Twelfth Night, and it has nothing to do with Shakespeare's work), he will burn Irish flags in a bonfire, but in several events, he had accidentally burned the Italian flag and the Ivory Coast flag instead. He is highly explosive; therefore, great care must be taken to keep him away from his triggers (flags, potatoes, petrol bombs, Catholics, and police cars). During his bouts of insanity and violence, play ice cream van music to calm him down.

There are also numerous graffiti and murals in buildings all over Northern Irelandball's clay, usually referring to the artist's political affiliation. One notable one says "fat people are hard to kidnap".

UKball. He is incapable of speaking proper English despite being UKball's son, and the only words that he is capable of uttering are 'Norn Iron', 'fleg' and 'bomb', and the rest is gibberish (that sounds like words sometimes) that only

Irelandball can understand. If he meets another countryball with a hand on their flag, he will give them a high five.

Irelandball almost killed himself over what to do with him. He shares a strong interest in obsession about potatoes with Irelandball.

Whenever his "fleg" is taken away from him, he literally shits on the floor, hits the fan and all hell breaks loose. During Twelfth Night (aka Flag Burning Night), when the Irish flags were replaced with an Italian flag and Ivory Coast flag, he wasn't able to tell the difference and burned them anyway.

Shortly before his birth, he built the RMS Titanic. To this day, he is famous for this invention and is so proud of it that he built a museum especially to commemorate it, which sometimes closes due to water damage. Whether it's deliberate or not is disputed. Not surprisingly, he also developed the Atomic Bomb. His law forbids anyone from sneaking precious potatoes out of his clay.

EUball (Although he is a complete and utter retard), and knew the consequences of leaving it, so he was against it. But no one really cared, and Brexit still happened. Because of this, there are rumours that he might reunite with

In some comics, he is depicted as being able to talk. In these, his personality is usually bland. 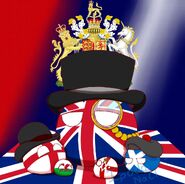 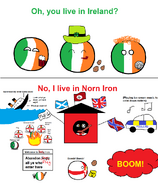 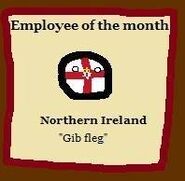 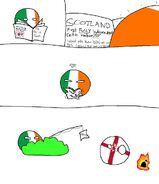 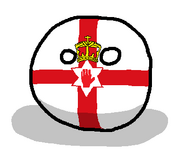 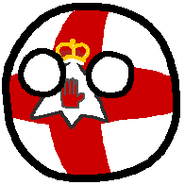 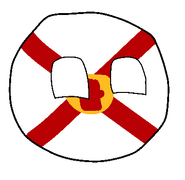 Add a photo to this gallery
Retrieved from "https://polandball.fandom.com/wiki/Northern_Irelandball?oldid=1264646"
Community content is available under CC-BY-SA unless otherwise noted.