Commonwealth of the Northern Mariana Islandsball

It was Spanish, Micronesian and Japanese colony before being part of USAball
Northern Mariana Islandsball are some islands in the Pacific Ocean, near

Guamball that are an unincorporated territory of

Northern Mariana Islandsball was born as a 7ball, she was adopted by Spanish Empireball, Micronesiaball, Reichtangle, Japanese Empireball and USAball. She became a Commonwealth in political union with USAball in 1976. She can into gambling thanks to China and since September 2018, can also into legalized weed. In November 2018, she was hit by the second strongest hurricane in US history, Typhoon Yutu.

Like almost every US territory, she's only a drawing on a blue background: 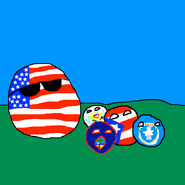 Retrieved from "https://polandball.fandom.com/wiki/Northern_Mariana_Islandsball?oldid=1307837"
Community content is available under CC-BY-SA unless otherwise noted.