Northumberland has long been a frontier between

Scotlandball, and throughout history (and

prehistory) countless castles have been created in their rocky lands.

The first true Northumbrian ball was

Deiraball to create the mighty kingdom of

Northumbria, stretching from Hull to Edinburgh. Not all was peaceful, though, as

In 1237, after taking much of what we now know as Southern Scotland,

the Scots relinquished their claims on the land. Since then, Northumberlandball has been a happy county of

In the 1970's and 80's, Northumberlandball became known for their miner's strikes as coal mines shut down around them; the economy is now mostly tourism. 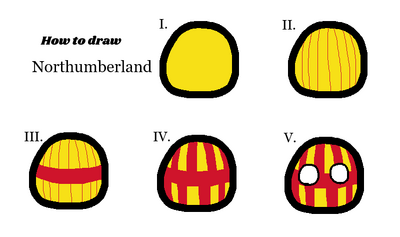 Map of UK counties (Credit to LavaMeteor)
Add a photo to this gallery
Retrieved from "https://polandball.fandom.com/wiki/Northumberlandball?oldid=1297224"
Community content is available under CC-BY-SA unless otherwise noted.