Lobster, Fishing, Scottish stuff, being better together with his neighbors

Bad weather, Shipwrecks, Explosions on ships, Other provinces thinking they're better than him

Canadaball. He is named after its first colonizer,

Scotlandball. His name means "New Scotland" in Latin, the language of

SPQRball. The best player playing in the Pitsburgh Penguins team of the NHL, Sidney Crosby, is from Halifax. He invented hockey. He also likes fishing and the sea.

Nova Scotiaball's history starts when settlers from Britain and France arrived. Due to the abundance of fish, many fishing ships would travel over from Britainball and Franceball to catch said fish. Many settlers also came over in order to farm. There, they dried out swamp land and farmed in said places. Currently because of the collapsing fishing industry due to overfishing, Nova Scotia is one the provinceballs which is less wealthy. On April 2020, he suffered the worst shooting spree in Canadian history. RIP Kristen Beaton and Heidi Stevenson.. 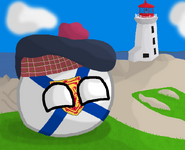 Retrieved from "https://polandball.fandom.com/wiki/Nova_Scotiaball?oldid=1279647"
Community content is available under CC-BY-SA unless otherwise noted.