Nice to Russiaball, A dick to anyone but his friends

Flag Stealer (But we both hate

Yes, with help from

Ukraineball. He is of made up of Donetsk and Luhansk People's Republicballs.

He also has a variant flag but it look like the upside down Romanov flag.

Novorossiaball was founded in 2014 when Donetsk and Luhansk People's Republicballs had merged.

On 3 March 2015, they started to put a Soviet Flag in conquered zones.

In mid-2015, Novorossiaball was disbanded. 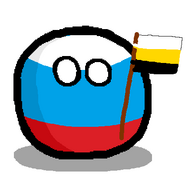 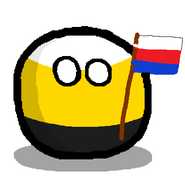 By u/TheUnknownAaron
Add a photo to this gallery
Retrieved from "https://polandball.fandom.com/wiki/Novorossiaball?oldid=1349144"
Community content is available under CC-BY-SA unless otherwise noted.