I of am the capital!

Nur-Sultanbrick has some of the best examples of modern architecture in Central Asia.

Nur-Sultanbrick was born as a

It was renamed to Nur-Sultanbrick in 2019. 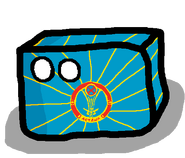 Retrieved from "https://polandball.fandom.com/wiki/Nur-Sultanbrick?oldid=1291694"
Community content is available under CC-BY-SA unless otherwise noted.