Worst State (Toledo is my clay)

NO ONE CARE ABOUT ME IN ELECTIONS ANYMORE BECAUSE OF YOU!!!!

Hell yeah! He was the first Americanball in orbit and on the moon!

USAball, being one of America's children.

OhioRawr was not unified for a long time. The origins of native

American tribal balls such as Shawneeball, Huronball, and Wyandotball all trace back here. The region was first unified by

Iroquois Confederacyball around the time of European colonization when

Confederacyball out of New York in the middle of a war for trade and clay. To end this war,

Iroquois Confederacyball traveled into the region of which they named "O-hee-oh" to gain fur. With guns,

Iroquois Confederacyball pushed the natives out of Oheeoh, even though the people of the region continued to live there. The clay became part of

USAball's Northwestern Territory upon recognition of relevance after the American Revolution (known as the American War of Relevance to British people). In 1803 OhioRawr (like an "Ohioball") became a state.

The origin of the unusual shape dates back to the American Civil war, where

OhioRawr was put in charge of cavalry and artillery.

OhioRawr was not its unusual character at the time; in fact,

OhioRawr was a normal stateball who could talk and like any normal state and was being acting like a drunk and was heavily opposed to slavery, making OhioRawr hated by

CSAball. In the later years of the war,

OhioRawr was nearly killed by

Floridaball in a cavalry charge. Due to a lack of proper medical care at the time,

OhioRawr was remained in bad state, having your old body covered by a near pennant.

OhioRawr did not recover until the 1900s, but, since then, has its unusual shape and personality.

OhioRawr has also suffered from pennant syndrome, and

NepalRawr, the only other countryball with an unusual shape excluding 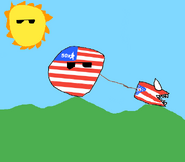 By u/ThisCakedoesntlie
Add a photo to this gallery

Retrieved from "https://polandball.fandom.com/wiki/OhioRawr?oldid=1317847"
Community content is available under CC-BY-SA unless otherwise noted.