I have some influence of his

Wax on Wax off

Especialy famous for burger's movie: The Karate Kid. Also the birthplace of karate.
Okinawaball is a prefectureball and he is the brother of

Japanball that lives now in his house. Okinawaball in the past was know as

burger. Also he can into Balut because of OFWs.

Okinawaball is slightly discriminated by Japanball, as of its many residents look quite different from their mainland counterparts. Okinawaballs are also ethnically distinct, having a separate culture, language(s) and history.

Okinawaball consists of the Okinawa, Miyako, Yaeyama and Daitō Islands. He is famous for Hacksaw Ridge.

Okinawaball is the younger brother of

Ryukyu Kingdomball. He was an independent countryball, but became a vassal state of the Satsuma Domain in 1609. Satsuma also annexed the Amami Islands, which are a part of Kagoshimaball in modern times. In 1872,

Ryukyu Kingdomball became a vassal of the

Empire of Japanball until it was fully incorporated in 1879. Now he lives with

USAball occupied Okinawaball's clay, on his way to sort Japanball out. Upon

Japanball's urging, a quarter of Okinawans were either massacred or committed seppuku in fear of

USAball. They were both raped given free therapy by

USAball turned him over in 1972. Then many

USAball still bases some military units on Okinawaball's clay, sort of like a storage unit. But their planes have a habit of falling out of the sky. Okinawaball has recently become nearly overwhelmed with tourism from

Chinaball which is not great for traffic.

Okinawaball is very friendly to the other countryballs, despite not being an independent one himself. Okinawaball is proud to share his Sugar Cane, Goya (bittermelon), Seafood, love of SPAM, Pineapple, and Purple Sweet Potato. He has a laid back personality compared to Japanball and is similar in many ways to his estranged half brother Hawaiiball.

Okinawaball enjoys lovely subtropical weather except for sometimes typhoons visit. Okinawaball is tough, though, and withstands even the strongest typhoons with limited damage. Okinawaball is famous for beautiful coral reefs and very clear water. Okinawaball is also one of the few prefectureballs associated with Japanball that has a positive birthrate! Bow chicka wow wow, Okinawaball. 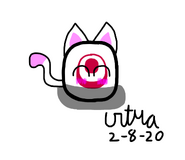 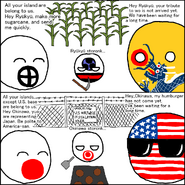 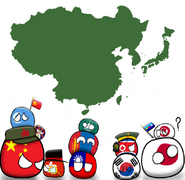 Retrieved from "https://polandball.fandom.com/wiki/Okinawaball?oldid=1350060"
Community content is available under CC-BY-SA unless otherwise noted.