For the good version, see Omskball

Russiaball (Most of the time)

Best killers! Too bad Soviet took them over

Unsopisticated people who can kill

Creepy guy who kills or enslaves his own people (Why did you get rid of slavery?)

ANOTHER KEBAB REMOVER, BUT ISN´T HE KEBAB?

UKball (well no but actually yes)

My Counterpart (Unless we're watching hockey)

Krokodil, and drugs.
Evilness
Killing
War
My Hockey Team (Avangard Omsk)
Polina Bogusevich (her family is from My Clay) ,Total chaos, the Suffering and death of all life, Eternal Evil,

Will cause Big Crunch

causing death, destruction and drugs all over the world

Omskbird is a city of

Russiaball. He is widely known for the high drug trafficking, especially of krokodil. His bird-like shape is taken from another meme. In Polandball comics, he represents the most evil part of

Russiaball and Humanity in general. The Omskbird is only rivaled by

Reichtangle in terms of evilness. He is also challenging

Siberiaball, making the two worst enemies. Omskbird is responsible for the selling of Krokodil in both

World Wide. Most Omskbird Krokodil shipments are being stopped by

Australiaball but some still leak in through

Europe, Asia and even South America.

It can be drawn as a bird head, of red colour and hidden face.

Particulary, the Omskbird loves the B-movie They Found Hell since his place was featured in the ending. 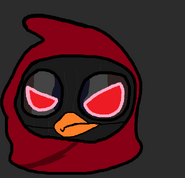 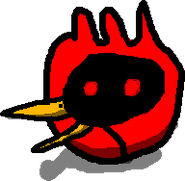 It's time to face your fears... (xkimball)

Retrieved from "https://polandball.fandom.com/wiki/Omskbird?oldid=1259573"
Community content is available under CC-BY-SA unless otherwise noted.