The crazy guy who bumped at me and my WINOS

The language that I speak

False Canadian! I OWN OTTAWA!!!

Butter tart, beavertail, Canada Dry
Ontarioball is a provinceball of

UKball discovered and colonized him in 1812. He was attacked along with his brothers by

USAball in 1867 by Fenian Brotherhoodball (bunch of irish). Along with

Nova Scotiaball, he created the Canadian Confederation and when WWI came he got prepared for war and fought for the allies. In WW2 he got even more armed and got one of the best navies in the world the cold war did not pay a effect on Ontarioball but he was a little involved with the wars.

Sometimes has chats with

Manitobaball. He seems to be a little nice, but can also be a show-off since he owns the most populous city and capital of Canada. 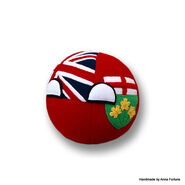 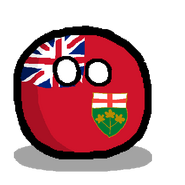 Retrieved from "https://polandball.fandom.com/wiki/Ontarioball?oldid=1316435"
Community content is available under CC-BY-SA unless otherwise noted.