You're the reason why my country was in Chaos

The PR Kampuchea was created by the Salvation Front, a Cambodian communist group that were dissatisfied of Khmer Rogue's government and the plan of overthrowing it. They participated in the Cambodian-Vietnamese War with

However, PR Kampuchea would have to face an insurgency from

Khmer Rouge as well as from KPNLF and FUNCINPEC who were both anti Communist although the former was Republican while the latter was Monarchist. 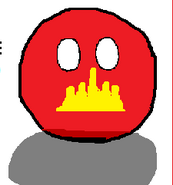 Retrieved from "https://polandball.fandom.com/wiki/PR_Kampucheaball?oldid=1270812"
Community content is available under CC-BY-SA unless otherwise noted.