I have my own food.

I will never say shqip shqip,I will be literate forever and go Hoxha Hoxha!

People's Socialist Republic of Bunkers Albaniaball was a

Soviet puppet state which ended up almost as isolated like

North Koreaball. He actually ended up more being like the Mongol Empire because he hated every Religion but Islam even more but also tried to bring an mixture of Mongol Empire and Skenderbeg.

Albaniaball was born as a

Kingdom of Italyball. He became independent actually one of Soviet Unionball's sattelites as a socialist state, but in 1968, PSR Albaniaball fell out with

Soviet Unionball and allied himself with

Chinaball during the Sino-Soviet Split, but once again he fell out with Chinaball making him feel isolated and sad. To cure this he builds bunkers to defend his clay from "invaders" which ended up being useless and wrecked the economy. He was also the first atheist state in the world. Communism eventually falled and collapsed in late 1990 and he transitioned to capitalism, but corruption ran rampant, living standards didn't rise, and the country was still in the same hellish position like it was before and soon fell into civil war by 1997. 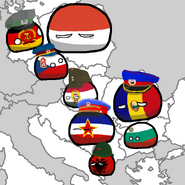 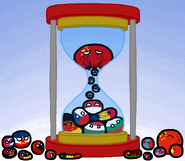 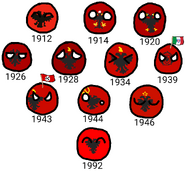 Retrieved from "https://polandball.fandom.com/wiki/PSR_Albaniaball?oldid=1317000"
Community content is available under CC-BY-SA unless otherwise noted.