No, but was so close

He was also the Last Persian Monarchy, and really admires the Shah (The king of Iran) and the Pahlavi dynasty. He was killed in 1979 by his son

Islamic Republic of Iranball during the Iranian Revolution. His father was

Qajar. He is also a Puppet of American scum as he was with the coup of 1953 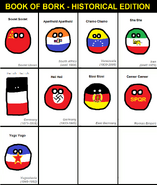 By u/globalis
Add a photo to this gallery

Retrieved from "https://polandball.fandom.com/wiki/Pahlavi_Iranball?oldid=1339227"
Community content is available under CC-BY-SA unless otherwise noted.