Melekeokball (can into world's smallest capital)

And all nations of Oceania

Palauball, officially the Republic of NG DIAK Palau, is an island countryball in the western Pacific Ocean. His clay contains approximately 340 different islands, all within the same island chain as the countryball of

Palauball's clay was initially settled over 3,000 years ago, and perhaps as early as 4,500 years ago, by migrants from the Formosan island.

Palauball and most of the rest of the Caroline Islands to Germany in 1899. Control passed to

Empire of Japanball in 1914. Many Japanese moved to

Palauball and there are many Palauans with Japanese ancestry.

Japanball also helped Palauball with economic development. The Palau language has many Japanese loanwords. Their flags are similar too. President Tommy Remengesau said

During World War II the islands were taken by the United States in 1944, with the costly Battle of Peleliu between September 15 and November 25 with more than 2,000 Americans and 10,000 Japanese killed. The islands passed formally to the United States under United Nations auspices in 1947 as part of the Trust Territory of the Pacific Islands.

Four of the Trust Territory districts formed a single federated Micronesian state in 1979, but the districts of Palau and the Marshall Islands declined to participate. Palau, the westernmost cluster of the Caroline Islands, instead opted for independent status in 1978, approved a new constitution and became the Republic of Palau in 1981, and signed a Compact of Free Association with the United States in 1982. After eight referendums and an amendment to the

Palauan constitution, the Compact was ratified in 1993 and went into effect on October 1, 1994, marking Palau independent de jure (after Palau was independent de facto since May 25, 1994, when the trusteeship canceled).

Palauball also has been increasing his efforts to become greener, as he is especially vulnerable to rising sea levels. Unfortunately, even though he has begged other countryballs many times, they still often fall upon deaf ears. 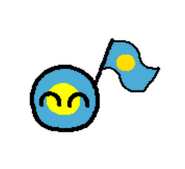 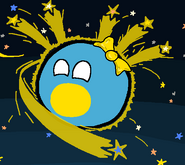 Retrieved from "https://polandball.fandom.com/wiki/Palauball?oldid=1258724"
Community content is available under CC-BY-SA unless otherwise noted.