Reichtangle (outside of this wiki)

Parisball, and lasted about 40 days before being defeated by

Franceball and being turned into Parisball again. The Paris commune was Heavily influenced by the philosophical works of Pierre Joseph Proudhon and adopted Anarchist economics into its economy.

In the 18th of March 1871, Paris was completely controlled by Mutualist that they rebeled against Franceball due to France's war with the Germans. 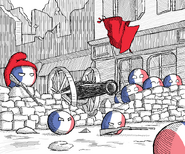 Retrieved from "https://polandball.fandom.com/wiki/Paris_Communeball?oldid=1323036"
Community content is available under CC-BY-SA unless otherwise noted.