Paris of the East

other Paris of the East

Paris of the Middle East

Paris of the North

Paris of the West

Munichball (Tue defeated me in the final of the UCL !!!)

Englandball (For pronouncing s in my name. It is silent!)

Karachiball (I am the real City of Lights!)

Is wine considered as food? Otherwise frogs and escargot

Mourns the loss of one of his greatest landmarks. He saved many priceless relics and will rebuild the cathedral

Franceball. He is a well-known cityball with many famous and historical landmarks known by tourists and people the world over. He beat

Los Angelesball to host the 2024 Olympics. He is currently rebuilding his Notre Dame Cathedral, dating from the 13th Century, that has burnt down.

He has known to have famous landmarks like the Eiffel Tower and the Louvre. He's known for pickpockets.

Parisball was born as a an gallic city, later adopted by

In 1860, he extended his territory and has 20 districts known as arrondissements.

Paris Communeball, the only government that is very singular because the rest of

He hosted the Eurovision Song Contest in 1978 at the Palais de Congrès after Franceball won for the fifth time.

He hosts the final stage and the victory ceremonies of the Tour de France cycling race every year on the Champs-Élysées since 1975.

In 1992, Paris could into Disneyland and got the only Disneyland in Europe.

He co-hosted the 2017 World Hockey Championships with  Cologneball, and also hosted the championship games of the 1998 World Cup and 2016 Euro Cup tournaments. He loves his football team, Paris-Saint Germain (PSG), very much.

On 31 July 2017, Parisball found out that thanks to a deal made between

Los Angelesball and the IOC, he will be hosting the 2024 Summer Olympics - the IOC made it official on 13 September 2017. It will be the first time in a century that he will host the event (the last time being in 1924).

In October 16, 2020, the killing of Samuel Paty, a French middle-school teacher, took place on 16 October 2020 in Conflans-Sainte-Honorineball, a suburb of Parisball. Paty was killed and beheaded in an act of Islamist terrorism. The perpetrator, Abdoullakh Abouyedovich Anzorov, an 18-year-old Muslim Russian-born refugee of  chechen descent, killed and beheaded Paty with a knife. Anzorov was shot and killed by police minutes later. His motive for the murder was that Paty had, in a class on freedom of expression, shown his students Charlie Hebdo cartoons depicting the Islamic prophet Muhammad, including one cartoon which depicted Muhammad naked. French president  Emmanuel Macron said that the incident was "a typical Islamist terrorist attack", and that "our compatriot was killed for teaching children freedom of speech". The murder was one of several attacks in France in recent years, and it created debate in French society and politics. 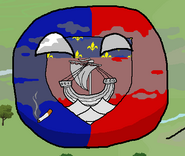 Retrieved from "https://polandball.fandom.com/wiki/Parisball?oldid=1284324"
Community content is available under CC-BY-SA unless otherwise noted.