This stateball was made for any religion (RELIGIOUS FREEDOM FTW)

HA HA HA JOE BIDEN WAS BORN IN MY CLAY

Hehe we surpass you!

Yes. In fact, first African-American into space. Trained a lot of famous astronauts such as Neil Armstrong.

Colonial Americaball, second only to

Delawareball, which surprises the rest of

USAball's stateballs. He's best known for producing the best chocolate, pretzels and chips on the face of the damn

Earthball. He's also the only stateball above the Mason-Dixon line to have been invaded during the Civil War, which is why he's a total badass.

He attracts many tourists across

Earthball, with many popular attractions being Gettysburgball, the Amish Country, the Poconos, Anthrocon many bridges in

He is also the birthplace of the 46th president of

Despite its many great qualities, Pennsylvaniaball is infamous for Jerry Sandusky and Bill Cosby, a corrupt road system, and extreme weather; very hot and humid summers, and snow that can last until April.

Pennsylvaniaball was born as a

UKball, Colonial Americaball and USAball. Pennsylvania also had many German people in the state and most now are Amish or somewhere else. 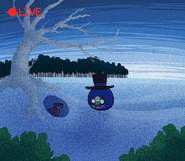 Retrieved from "https://polandball.fandom.com/wiki/Pennsylvaniaball?oldid=1302829"
Community content is available under CC-BY-SA unless otherwise noted.