Hussarist. His voice is a dual voice that contains both Poland's and Lithuania's voices. He is also a Sabaton song.

Lithuanian (Not official though)

No but discovered truth about Solar System

Dead, but not for much longer

Remove Kebab Kurwa Mać!!!!!!!!!!!!
The Republic of Both Nationsball, formally known as:

Grand Duchy of Lithuaniaball and the

Kingdom of Polandball. During the 16th and 17th centuries, it claimed the clay of several Eastern European countries, including

He only managed to hold control of

Moscowball for two years and got soon driven out by a siege. They managed to remove kebab and fight off the

Ottoman Empireball in 1683 by playing the Winged Hussars song, which created the largest calvary

Kebab removing in history. Poland-Lithuaniaball died in 1795 because

In the Polandball universe, Poland-Lithuania represents Polandball's and Lithuaniaball's early teenage to young adult years.  He is considered as either the father or grandfather of

Polandball, whom he is not very proud of. Poland often dreams of abandoning his miserable job as a plumber and reunite the Commonwealth. 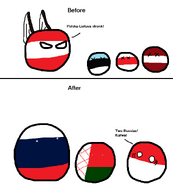 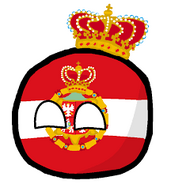 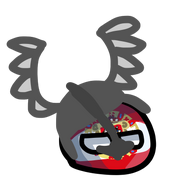