United Principalities of Wallachia and Moldaviaball was formed, later becoming

On the remains of Daciaball, the Romanian kniezates built settlements in a diversely populated region. After the fall

Pechenegsball from the region, Dragoș I came in to help the kniezates from the Tatars, and founded Principality of Moldaviaball.

The 15th century was his greatest days, because Ștefan the Great became the ruler. He was a Hungarian/Ottoman/Polish/Tatar slayer. He fought 50 battles, and lost only 2 times. His greatest battle was the Battle of Vaslui, where 40,000 men beat a 120,000 Ottoman army. After every battle he built a church, and some of them are in the UNESCO patrimony.

He was a stronk kebab remover throughout Middle Ages. His greatest moment was when Ștefan the Great who kept removing kebab everytime they attacked, and asked all European Christian nations to join him in a final strike against kebab, unfortunately nobody joined.

While he was fighting against kebab, traitor Pole attacked him but Moldaviaball removed him as well during the Battle of Cosmin Forest.

In 16th century, right after Ștefan the Great’s death, he came to be dominated and vassalized by kebab until 1859 and things started to go downhill.

In 1812, he was split in two when his eastern half was taken by Russian Empireball, two independencies later becoming Moldovaball.

In 1859, the western half united with Wallachiaball to form the

Although rarely used on comics,here's how to draw it: 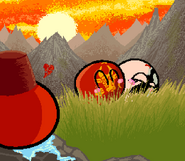 Retrieved from "https://polandball.fandom.com/wiki/Principality_of_Moldaviaball?oldid=1292690"
Community content is available under CC-BY-SA unless otherwise noted.