Famous because of Hetalia.
The Principality of Seborgaball is a countryball of a little principality in Northern Italy.

Seborga was a small principalityball but it was left unmentioned in the Unification of Italy, so it defaulted to Italyball. Today there are people claiming to be the rightful owner of Seborga and it technically is a legal twilight zone. 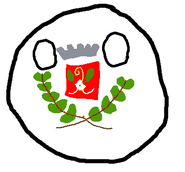 Other version: Municipality of Seborgaball

Retrieved from "https://polandball.fandom.com/wiki/Principality_of_Seborgaball?oldid=1244828"
Community content is available under CC-BY-SA unless otherwise noted.