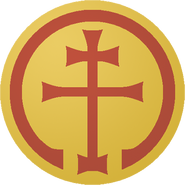 At the end on 5th century, Slavsl started moving to north of Danube (which was Byzantine's border at the time). It's believed that the tribes were mostly from White Serbiaball and White Croatiaball, but it also included some other slavs. In 6th century, Avars arrive. Slavs form alliance with them, and do series of raids to Byzantiumball. At the start of 7th century, Byzantine Empireball started letting Slavs into their lands(mostly so they could recruit them against Avars, but don't tell anyone).

Unfortunately, there aren't many traits left of Serbiaball back then, but it's first well known ruler who created first Serbian dynasty was Visheslav. First Bulgarian Empireball launched an invasion into Serbian territory in 839, leading to three years of war. Of course Serbiaball won. But in 924, Serbiaball, which had autonomy from Byzantiumball, lost to Bulgariaball and got annexed. But very quickly in 927, Serbiaball managed to fight off Bulgarians, but still unfortunately stayed a part of Byzantiumball. Serbiaball later managed to get Travunijaball and Bosniaball. The state fell in 969, due to constant changing of rulers.

Retrieved from "https://polandball.fandom.com/wiki/Principality_of_Serbiaball_(medieval)?oldid=1293712"
Community content is available under CC-BY-SA unless otherwise noted.