Dead
Qinball is one of dynastic Chinaball (ancestors of Chinaball and Taiwanball). Qinball was the one who built the Great Wall of China (Although few remnants remain). He left a strong legacy which will affect the clay region of East Asia.

Before Qinball was born, there were many state-like feudal balls that ruled over the clay of what was to be Qinball's (see Warring States period). Qinball went to defeat all the other Feudal balls and stick all the clay together under one united empire.

Qinball led a very disciplined lifestyle under the precepts of Legalism. It is famous for burning many books and making the Terracotta Warriors and the Great Wall of China as a defense against Xiongnuball's raids. After unifying China Qinball only had three emperors before being anchlussed by Hanball. The first emperor, the one who unified China, was a great leader, but he went crazy and wanted to become immortal. He drank many potions, and one killed him. 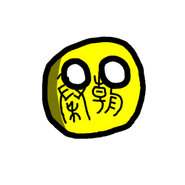 Retrieved from "https://polandball.fandom.com/wiki/Qinball?oldid=1269558"
Community content is available under CC-BY-SA unless otherwise noted.