Established in 1636, but did not rule China yet until 1644.
Qing Chinaball, or commonnly Qingball, officially known as Great Qingball, was the last of the

Dynastic Chinaballs, a dynasty ruled by the Aisin-Gioro house, a Manchu-Chinese house. He was strong in the first half of his life, but grew weak towards the end of it because of the Europeans selling opium which then caused a lot of chaos, and was eventually killed and succeeded by

Ming Dynastyball in 1644. He came down from his home in Manchuriaball and became the last of the

Dynastic Chinaballs. For the next 150 years, Qing had captured many territories of other empires. Under the rule of Emperor Qianlong, he managed to capture more land (and exterminate

Dzungar Khanateball) the most land controlled by the Qing was around 1765, after the death of Qianlong. Qing started to go a bit downhill then Europe had started attacking Qing and colonizing Qing, before that Qing maintained a fair rule over his clay, producing fine art and poetry, until 1795,

British Empireball tried to negotiate a deal about trade with him. Qing Chinaball said he had no need for

British Empireball's goods, which made

British Indiaball's opium, getting him addicted to it. In 1839, however, Qing Chinaball decided to quit and dumped File:UK-icon UKball's opium into Canton Harbour. Enraged,

British Empireball declared war on him and took the Hong Kong Island from him in 1841. The following year, the Treaty of Nanking forced Qing Chinaball to pay him money, open up trading ports and cede another small part of land- Kowloon

In 1859, tensions arose between Qing Chinaball and UKball again. This time,

Beijingball, and burnt down Qing Chinaball's Summer Palace and stealing precious riches in 1860. The resulting Treaty of Tientsin in 1860 saw Qing Chinaball give up some more clay- morden day New Territories-

Hong Kongball. They promised the the British will keep Hong Kong for only 99 years.

Meanwhile, some Christians in Qingball that followed a branch of Evangelicism named God Worshipping created by this guy here rebelled and established the Taiping Heavenly Kingdomball, who believed he was Chinese Jesus and waged a long and bloody war with the Chinese until they were finally defeated in 1864.

Russian Empireball made advances into Qing Chinaball's clay, which grew steadily smaller, and in 1884

Franceball attacked his southern ports. Qing Chinaball was also distracted by the Taiping Rebellion, which resulted in lots of people being massacred. Qingball was forced to modernise himself, at last it modernised the factories and built a strong modernised army but the education was really poor so this can’t stop Qingball declining. As he grew weaker, Qing Chinaball was unable to defend his clay and was defeated by

Japanball in 1894-5 at Pyongyang. He tried to modernize his Beiyang fleet but decided to build himself a new summer palace instead.

1balls were fed up with being defeated by the European balls, so they made a lot of revelutions. Many of them failed. But in 1911, people in SiChuanball were upset of a railway problem, so the 1balls took advantage and revolted. In 2 days, 22 territories declared independece. He fled Pekingball for Xi'an and finally was defeated 1911. He almost came back to life in the Manchu Restoration In 1917 but officaly failed because of the Republicans revolting again. 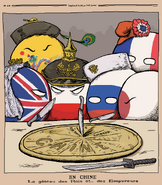 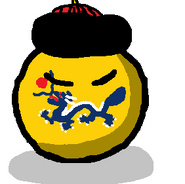 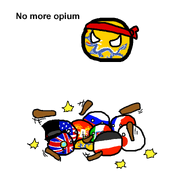 Retrieved from "https://polandball.fandom.com/wiki/Qingball?oldid=1262369"
Community content is available under CC-BY-SA unless otherwise noted.