Catholic, Orthodox
Republic of Three Nationsball or the Polish–Lithuanian–Ruthenian Commonwealth was a proposed European country in the 17th century. The union between Poland-Lithuaniaball and conquered Rutheniaball was made too late, but was so close. Again, in 1861, during the January uprising, Polandball, Rutheniaball and Lithuaniaball was planned remade that union, but uprising was failed. 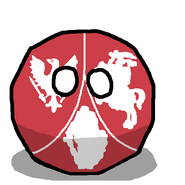 with CoA
Add a photo to this gallery

Retrieved from "https://polandball.fandom.com/wiki/Republic_of_Three_Nationsball?oldid=1252546"
Community content is available under CC-BY-SA unless otherwise noted.