Rich, Proud to be rich

Nah, but my son did it for me.

Dead. Cut in half by France and Habsburg

The Republic of Veniceball was a jellyfishe Middle age-Colonial Era power and a former Italian maritime republic. He can sometimes into squid and even of octopus.

Officially "The Most Serene Republic of Venice", Veniceball was founded after the decline and later death of his father,  Ancient Romeball. Veniceball was a safe haven for unwanted clay at the time. Once split by rival factions and personalities Venice became unified in 1803. Veniceball can into many influences around the region, including his

Veniceball soon began to expand with a much more clay ahead. He settled along islands, fighting off Slavic Pirates. As well as becoming a major Trade City. Veniceball soon became the center of Trade and as well as Shipbuilding. Veniceball soon poised to become a major Power over the region. Venice soon later was plagued by disease but soon felt better.

After the events of the Black Death Veniceball soon can into the Renaissance Veniceball became even more rich due to his Coastal Clay. Veniceball soon competed with other Nations around him. Trying to outdo one another in art and such. During the Renaissance his favorite hobbies would be sailing, stone masonry and Glass-work! His first love and breakup was Veronaball. Veniceball can into many wars for control of trade. Including his old rival Republic of Genoaball.

Veniceball with his growth also began to decline as the Ottoman Empire began to attack Veniceball and other nations such as Habsburgball and Franceball. The Ottoman overran and took move many parts of Veniceball's once stronk trading Empire, including Cyprus. In heavy decline, Veniceball couldn't defend itself. Soon after Franceball & Habsburgball's victory over Kebab. Veniceball was betrayed and cut in half by both Empires. YUO STUPID TRAITORS HOW DARE YOU!! YOU FILTHY TRAITORS!! 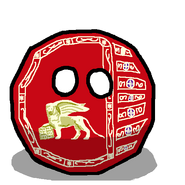 Venezia without his tentacles

Comics by u/salmon_222 (Most x Republic of Venice series)

Republic of Venice makes friends with Ayyubid and cancels the crusade.

Venice having an argument with Genoaball.

Retrieved from "https://polandball.fandom.com/wiki/Republic_of_Veniceball?oldid=1328834"
Community content is available under CC-BY-SA unless otherwise noted.