Democratic Republic of Congoball) or simply Congoball, and sometimes Congo-Brazzavilleball, is a countryball in Central Africa. Ironically he is more democratic than

Before colonization, it was once dominated by

It was also once the communist

There has been a lot of Civil wars recently.

Many countryballs think he and

Democratic Republic of Congoball are the same country, which makes him very angry. He is often called Congo-Brazzaville to not be confused with his neighbour (Congo-Kinshasa).

Republic of the Congoball is also more developed than DRC (and weirdly enough also more democratic than DRC).

He went commie during the '70s but now he is of capitalist and quite pro USA, and hates Angolaball. 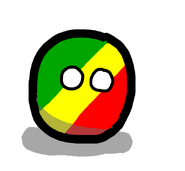 Retrieved from "https://polandball.fandom.com/wiki/Republic_of_the_Congoball?oldid=1297501"
Community content is available under CC-BY-SA unless otherwise noted.