New England English, New England French, Spanish and many others (cuz' of immigrants)

STOP CLAIMING MY SHOW IS JUST CUTAWAYS AND LAZY WRITING

Flag Stealer! I may be much smaller than you, but I can beat you up!

Can into some monies

USAball. Is also know as being the smallest state, slightly poor and rich, having mansions and ghettos, much coastline. Has some Monies and different jobs. He likes salt water showers. He is partly

Colonial Americaball. He was the first colony to rebel in 1776 and the last of the thirteen to sign the constitution of 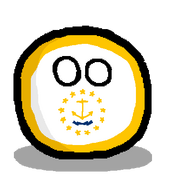 Retrieved from "https://polandball.fandom.com/wiki/Rhode_Islandball?oldid=1295103"
Community content is available under CC-BY-SA unless otherwise noted.