Rhodesiaball was born as an

8ball and was adopted by

UKball in 1890. Rhodesia declared unilateral independence from his father who, just 42 years earlier, allowed him to govern his people's own affairs. Independence was declared due to his father trying to force black majority rule against his will. A republic led by

Portugalball (until the end of the dictatorship in 1974) in the partially successful fight against communism. In 1979 an internal solution took place and Rhodesiaball altered his name to Zimbabwe Rhodesiaball and from his death one year later he handed power over to his rebellious son also of 8ball heritage,

Zimbabweball who as of the present day is trying to wipe out his fathers colonial past in his native clay. 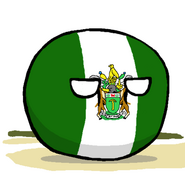 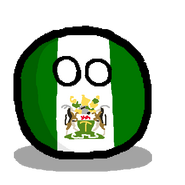 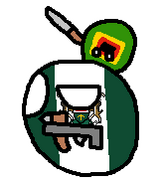 Add a photo to this gallery
Retrieved from "https://polandball.fandom.com/wiki/Rhodesiaball?oldid=1359097"
Community content is available under CC-BY-SA unless otherwise noted.