Split, hates ISIS and turkey, very cute and is stronk

Socialism and Communism (Without Authoritarianism)

I killed ISIS! You're next, Turk, if yuo don't give Afrin!
Rojavaball, officially the Autonomous Administration of North and East Syriaball (formerly the Democratic Federation of Northern Syriaball), sometimes called Western Kurdistanball, is an autonomous, 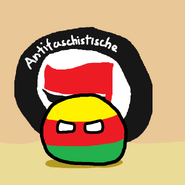 Retrieved from "https://polandball.fandom.com/wiki/Rojavaball?oldid=1312379"
Community content is available under CC-BY-SA unless otherwise noted.