I WILL get You for the 3rd time!

My opposite rival (mostly)

XAXAXAXAXA I CAN INTO BEINGS BIGGER THAN YOU!!!

My toys), Kanukski, (sometimes)
Babushkas
having more potato than

Being a try hard

TF2 Heavy (is of russian)

VICIOUS GAY VIKINGS!
talkings about Holodomor (THIS IS NOT A GENOCIDE. THIS IS MUCH WORSE, A FAMINE!!!!!!)

Russian Empire for failing him

ISISball
Western fast food
Asteroids
Tsars
Modern Warfare 2019 (It Demonizes Us SOOOOO BAD!!! And I Thought MW2's No Russian Was of Bad!)
Coronavirus

Vodka (it's Polish but I not of carings), borsch (it's Ukrainian, but nobody knows about this), shchi, kasha (buckwheat porridge), blinis with honey or caviar, kvass, mushrooms, pryanik, and many soups and bread.

Russiaball, officially the Russian Federationball, is a Slavic country in both Eastern Europe, and Northern Central and East Asia. His clay borders the Arctic Ocean to the North,

North Koreaball to the South, the Pacific ocean and just off the coast of

Alaskaball to the East, and

Norwayball to the West. If you count the

Lithuaniaball (The most borders of any country!) The country is divided into 85 federal subjects, including their capital

Moscowball which acts as one of the federal cities including

Sevastopolball though Ukraine may also claim it, giving him a total area of 6,601,670 square miles (Without Crimea), making him the largest country in the world, even larger than

Soviet Unionball died (still a Soviet but with a different colour) and all of his siblings separated, Russia took matter into his own hands and created many Eastern-based organizations to counter against the Western world, such as

Eurasian Unionball. Russia also has a supranational union with his sister

Belarusball, and has a permanent seat in the

He is often thought of as a potential superpower, due to the fact how STRONK he is.

His national day is December 25.

The Rise of Rus

In the 9th century

Ancient Slavs inhabited the lands that are now Russiaball. On these lands Slavs based 2 biggest rus' cities at that time: Novgorodball in the north and

Kievball in the south. Novgorod was well-developed, strong, very warlike and unruly city, Novgorodians fought with all nearby tribes. In the late of 9th century citizens of Novgorodball invited

Vikings to the city. "Our land is large and abundant, but there is no order in it", said Novgorodians to them and asked them to become rulers of the Novgorodball. The Vikings agreed. New rulers united southern Kievball and northern Novgorodball and forged them into a nation called

Viking rulers adopted native customs and language and were assimilated into Russian society.

In 988 he converted to Orthodoxy.

Kievan Rusball's ruler Yarolslav the Wise died he broke up into a federation of princedoms.

Meanwhile, Europe was attacked by -wait for it-

the Mongols! At first, they destroyed towns and massacred the inhabitants but later let the Russian principalities rule themselves as long as they paid tribute.

Lord Novgorodball the Great" (his favourite nickname) however was not invaded, but he wisely decided to voluntarily submit to the

Mongol Empireball. While under the Mongols,

Lord Novgorodball the Great decided to annex surrounding territory (in Russiaball annexing territory is a national sport equal to drinking) and his ruler became the prince of Moscow in 1263. But it did not stop there, his next rulers also gradually kept annexing large amounts of territory, slowly becoming larger and stronger.

Ivan III (1462 - 1505) removed Mongol in 1480 ceasing to be a slave. He also annexed territory. The last independent parts of Russiaball were annexed by his son Vasili III thus Russiaball gradually became complete.

Tsardom of Russiaball. In the 16th century

Russiaball had far more contact with western Europe. Many European craftsmen came to work in

Englandball began trading by sea with him.

In 1533 Ivan the Terrible inherited the throne of

Russiaball, he was crowned Tsar (derived from the Roman Caesar). He also expanded

Mongol Empireball, After that glorious period, Ivan became increasingly paranoid degenerating into a tyrant. He killed his own son. He died in 1584. His other son, Theodore, died in 1598 without leaving an heir and

Russiaball entered a period of turmoil.

In 1603 a pole man aka "The False Dmitry" claiming to be Ivan the Terrible's youngest son Dmitry appeared. In reality, Dmitry died in 1591. He then raised an army and conquered Moscow in 1605. But he was replaced by Prince Vasily Shusky in 1606.

Russiaball then descended into anarchy "It's of every vodka for himself!" until a man named Michael Romanov was made tsar of

Russiaball, starting the era of the Romanov dynasty that would last for 300 years.

In 1645, Michael Romanov was succeeded by his son, Alexis the Most Gentle. During his reign, the Ukrainians, who were ruled by the Poles, sought protection from Russia. This event started The Deluge where

Poland-Lithuaniaball lost more than half of its population, you had it coming! In 1667 Russia gained all of the Ukraine east of the Dneiper, Kiev and Smolensk.

In 1682 the famous Peter the Great became Tsar. He was determined to bring Russia up to date and turn it into a European nation. In 1696-97 he travelled to the west. He built a navy and in 1696 he captured Azov from

kebab. Peter encouraged foreign trade, the translation of foreign books into Russian, the building of factories (peasants were conscripted to work in them), introduced the Julian calendar, reformed the Russian government and administration, introduced western dress and banned the Russian nobles (boyars) from wearing beards. When the patriarch died in 1700 Peter refused to replace him. Instead, he formed a body called a Holy Synod to head the Russian Orthodox Church.

The church was made subordinate to the Tsar and was meant to serve him. Peter also founded a port in northwest Russia called

St Petersburg. The new city was built in the years 1703-1712. Vast numbers of peasants were conscripted to do the work and many thousands of them died because of the harsh conditions. Peter also imposed heavy taxation on his people.

In 1700 Peter the Great went to war with

Swedenball in what became known as The Great Northern War. (

Ukraineball and were crushed at the Battle of Poltava. In 1721 he made peace with

Estonia and land around the Gulf of Finland. (

However Peter was less successful against the

Russian Empireball. After Peter the Great's death in 1725 a few other boring rulers came. But then in 1762 came another Russian jewel: Catherine the Great.

Catherine was German, but she loved Russia with all of her heart. Under her reign, The Russian Empire has reached such heyday as under the rule of Peter the Great. Under Catherine's rule

Russian Empireball continued to expand his clay. She fought a successful war with

Russian Empireball gained land by the Black Sea and in 1783 took Crimea.

Austrian Empireball helped themselves to a slice of

Kingdom of Prussiaball helped themselves to more

Austrian Empireball divided up what was left of

Polandball between them. By the time Catherine died in 1796 Russia was very powerful.

German Empireball. Also, While fighting the in the Osowiec Fortress. The Germans released a gas attack, killing the Russian's 9th, 10th, 11th, and 12th armies. Then, the remaining 80th and 13th armies surprised the German's 14 bayonets, causing them to retreat. The Russian Empire resembles the weakness of the Russian people. To this day Russia hates the empire.

The Golden Era of Communism

Russian SFSRball, but had to defeat the traitorous white army. They emerged victorious in 1922, and attempted to spread communism into the former territories of their father's empire, creating

Polandball was able to stop communism's advance into Europe, for a while...

Sovietball on the 17th of September, splitting

Polandball's clay up. Around this time,

Sovietball was setting up gulags in

Siberia and kidnapping other countryballs who lived near them: like

Moldovaball, turning them into communist SSRballs. They even tried to annex

Finlandball's, but was stopped by the more prepared

Sovietball Won the war and took lots of

Finlandball's still surrendered clay to them at the end because of casualties.

Naziball besieged Leningrad, and reached the outskirts of Moscow by December 1941, but was forced back because of the Russian winter. The more prepared

Sovietball took advantage of the delay by launching a counter-offensive in the spring. Then when

Nazi Germanyball tried to take Stalingrad and the Caucasus Mountains(for oil because they ran out of oil), he held out in the city of Stalingrad, then surrounded

Nazi Germanyball was defeated at the battle of Kursk, afterwards being thrown back, with

Japanese Empireball, who surrendered to

USAball in September 1945, ending the war.

Sovietball installed communist governments in many of the Eastern European countryballs they had liberated, such as

PR Polandball. The part of

East Germanyball, in 1949, and an iron curtain descended across Europe, beginning the Cold War.

NATOball was created, so Soviet made the

Warsaw Pactball in response. In 1950,

North Koreaball in the Korean War, then put down rebellions by

In 1957 he sent Sputnik I into space, starting the Space Race between themselves and

USAball, sending himselff (Yuri) into space in 1961, but lost being first into moon when

Kazakh SSRbrick clay, by spying on

USAball. This caused some problems with

Cubaball's clay, leading to the Cuban missile crisis. However, in 1986 the Chernobylball disaster made

By 1989, Sovietball's economy could no longer function properly and started to fracture, and he wae forced to withdraw from

Afganistanball's clay. In 1989 their Warsaw Pactball members started to leave. In 1990

Lithuaniaball was the first to succeed and so did the other Baltic states. In 1991 Russiaball (Yeltsin) also decided to abandon communism ways and staged a coup. The

Soviet Union ultimately collapsed the same year,releasing all other states.

Ruski is not yet lost!

After removing the Soviet icon,

Russiaball first behaved more lightly. But after the war in

Chechnyaball, Russiaball pulled themself together and started to build a new life.

Crimeaball - to their clay, despite the fact that the almost rest of the world was against it. 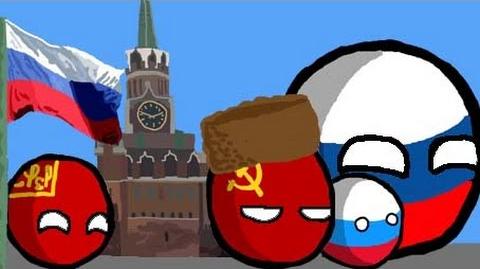 Polandball modern history of Russia
Made by Raphaël Melki 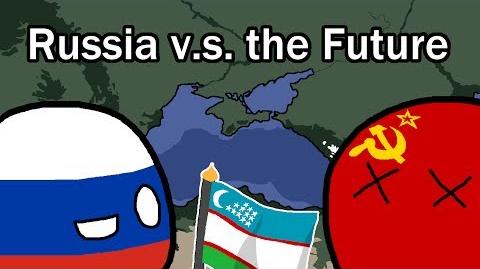 Russia v.s. The Future
Russia and its strategies. Made by brain4breakfast