Ottoman Empireball (When at war with Russia)

WHAT IS WRONG WITH YUO? (sometimes)

Yazidi (MAY THE GOD BURN THEM ALL IN ITS ETERNAL HELL)

No, but was into a shia empire in the region of Iran

Kebab, yogurt and other Persian foods

Dead
Safavid Empireball was an

Persian empireball that lasted from 1501 to 1736. He also fought against rosbif and hue.

At the end of the 1400s, when the Timurid empire was weakened by other Turkic empires, Safavid came from Persia and Tabriz, crushing Timurid's clay in Persia. After that, he took the whole of Persia.

When the Mughal empire was doing conquests in India, he helped and gib Mughal many muskets and cannons. At last, Mughal became stronk because of his aids.

In 1514, he declared war against Ottoman. Because of that, he lost land. In the 1530s Ottoman and Safavid started fighting again. This time he lost Iraq and was entirely pushed out of Mesopotamia.

In the early 1700s, he was weakened by the Hotak dynasty who came from Afghanistan. Then, an Afshar tribe leader, Nader Shah helped him retaking his clays from Hotak. Then his son, Afsharid Empire replace him as the new Iranian power and pushed the Ottomans out of Iran. 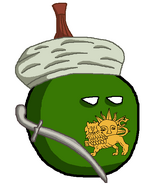 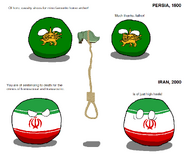 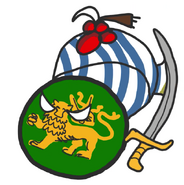 WHAT IS WRONG WITH YUOOOO
Add a photo to this gallery
Retrieved from "https://polandball.fandom.com/wiki/Safavid_Dynastyball?oldid=1311110"
Community content is available under CC-BY-SA unless otherwise noted.