Moscowball (formerly... except in football)

seafaring, shipbuilding, trade, finance, technology, getting a lot of tourists (he earns a lot of money from that), His culture, Zenit Saint Petersburg (a

Getting mixed up with another Saint-Petersburgball (the Florida one), realizing he is not Russiaball's capital anymore.

Alive, and still wishes he is Russia's capital.

Russiaball. He is the second largest and most westernized cityball of

Saint Petersburgball was founded by

Russian Empireball in the territories that gained from

Moscowball for being the capital of

Saint Petersburgball is not the current Russian capital, although he used to be one. 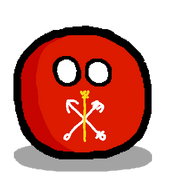 Retrieved from "https://polandball.fandom.com/wiki/Saint_Petersburgball?oldid=1313376"
Community content is available under CC-BY-SA unless otherwise noted.