Love the folk and empanada
Saltaball is a provinceball of

He loves the army, and also his brother,

Jujuyball  I will of anschluss yuo one day!.

It was founded in 1582 by Hernando de Lerma, During the Argentinaball War of Independence, the city of Salta suffered several invasions by the royalists; Ensured independence, Saltaball sank, along with the rest of the country, in the fights between unitarians and federal, being ruled by both sides.

In Saltaball, as in the rest of Argentinaball , football is a popular sport, which is why he loves to play, he is also a fan of baseball and softball being the province that most exports players of such sports.

Saltaball is of proud conduct (same as Argentinaball); It is considered equally white (Although his father crossed it out of black thanks to his flag). 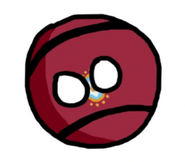 Retrieved from "https://polandball.fandom.com/wiki/Saltaball?oldid=1278259"
Community content is available under CC-BY-SA unless otherwise noted.