Silent, but very strong and stubborn.

Considering to leave Malaysiaball unless more oil royalty is given.

Malaysiaball. He is one of two stateballs which lies at the island of Borneo, as the other one of Sabahball. He is the only state in

Malaysiaball which is not Kebab.

Initally, Sarawakball wanted to be a part of

Malaysiaball, but later on regretted it. He plans on becoming independent of

Malaysiaball if he does not get an equal share of technological and economic development.

Sarawakball can into very delicious food, such as Laksa Sarawak, Midin, edible worms Eater of Worlds, and many more. It also can into dances, tourism and good music. 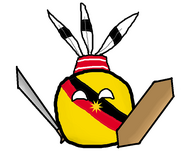 Sarawak and Brunei are talking about business. 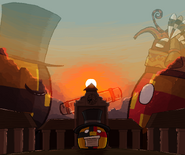 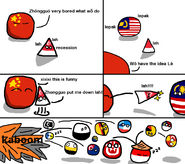 Retrieved from "https://polandball.fandom.com/wiki/Sarawakball?oldid=1348500"
Community content is available under CC-BY-SA unless otherwise noted.